This article was first published in Antiques Journal, May 2020, by Eva Schwartz.

Of all the garden ornaments we collect and admire, the Venetian wellhead seems most imbued with both historic importance and romantic spirit. It tells a story like no other, and adds an almost regal weight to a garden. Wellheads first played a vital role in Venetian culture, but then took on an equally important second life–this time as coveted art objects collected (i.e. pillaged) by dealers, connoisseurs, and travelers on the Grand Tour.

Ironically, Venice was short of water. The Venetian historian and diarist, Marino Sanudo (1466-1536) wrote that “Venezia e’ in aqua ma non ha aqua” [“Venice is in water but doesn’t have water.”] As a saltwater-locked island city, Venice was challenged to supply freshwater to its citizens. For centuries, this monumental task was accomplished through the use of ingeniously engineered wells. Unlike traditional wells that tapped into ground water, Venice’s wells filtered, collected, and stored rainwater. 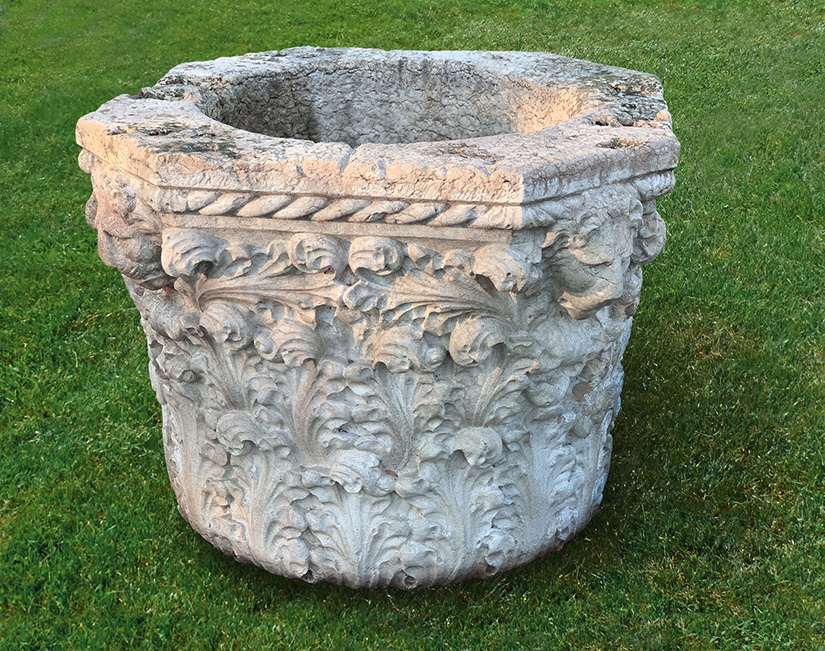 In 1300, there were about 100 wells in Venice. In 1322, the Great Council (the political body of the Republic of Venice) voted for the construction of 50 additional wells, followed by 30 more in 1424. By 1797, when the Venetian Republic fell, there were more than 6,000 private and public wells in the city.

As wellheads (both public and private) were paid for by wealthy Venetian families, they often bore the name and/or crest of the donors. The wellheads were a point of pride for donor families and a reminder to fellow Venetians of their power and influence.

So precious was the water in these wells that wellheads were kept locked via large metal and/or wooden lids that were opened only twice a day by a parish priest entrusted with the task. 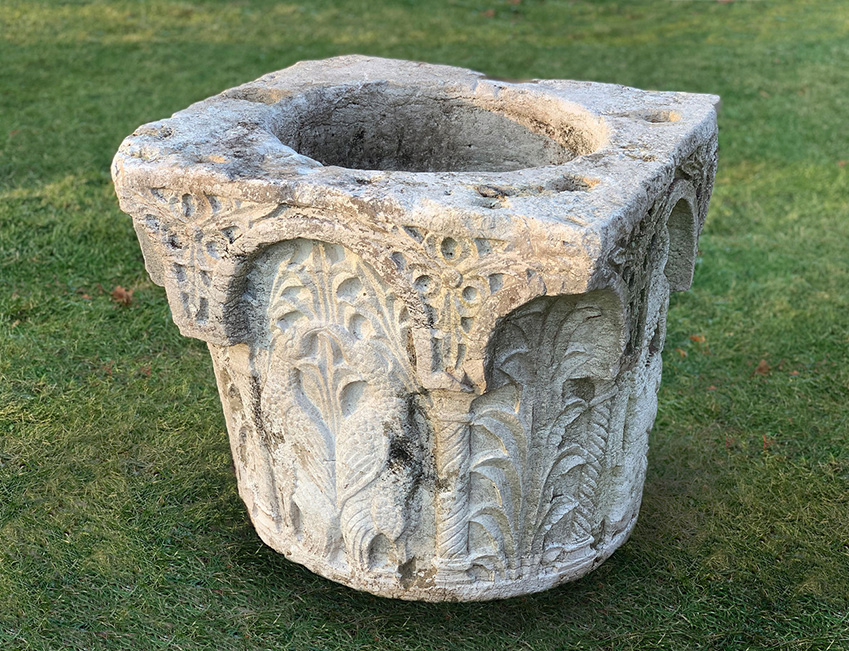 The standard form of wellhead from the 14th to the 16th centuries — a tapered cylindrical body with quadrangular top and suspended arches. Courtesy Barbara Israel Garden Antiques

The earliest Venetian wellheads were the hollowed-out capitals of old columns. These were followed in the early Middle Ages by wellheads that were densely carved with mythological animalia and vegetal motifs borrowed from the Romanesque period. 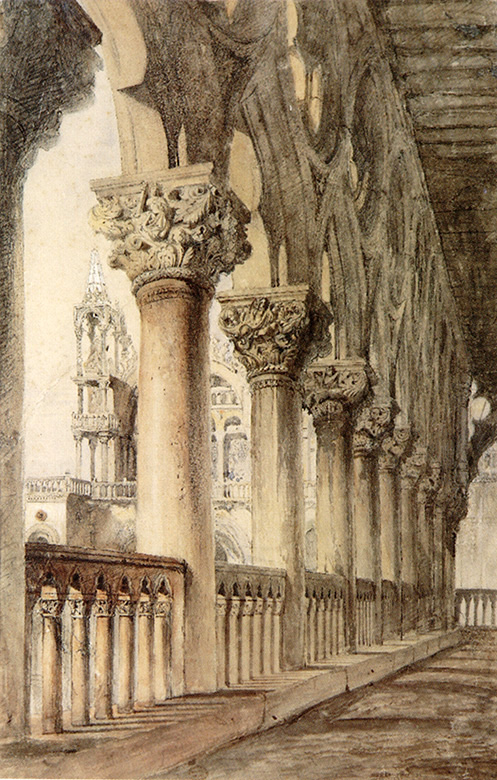 Painting by John Ruskin of the sort of finials that were often made into wellheads. John Ruskin 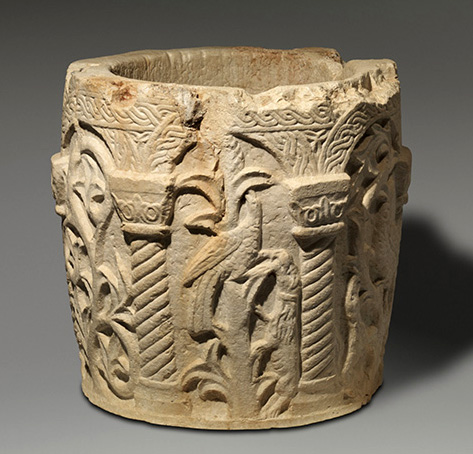 In the 14th century, a form arose that would become the standard for a couple of centuries—a tapered cylindrical body with quadrangular top and suspended arches. Many of the wellheads that remain in Venice– some of them quite utilitarian-looking– conform to this particular type. Still others, dating to the 15th and 16th centuries, are profusely carved in high relief with classical elements including portrait busts, lion masks, floral and fruited festoons, and acanthus leaves.

With the construction of the first aqueduct in 1884, however, wells were filled in and thousands of wellheads became ornamental relics. But the trade in wellheads had begun earlier.

According to Hungarian art historian Anna Tüskés, Venice had begun selling its wellheads to museums and art collectors as early as the 1840s. The demand was intensified by the popularity of the “Grand Tour” and the publication of guidebooks and memoirs written by art historians and critics. One of these was the English critic and intellectual, John Ruskin (1819-1900), who published the notable treatise, The Stones of Venice, between 1851 and 1853.

Some of the finest examples of Venetian wellheads in English gardens can be found at Hever Castle in Kent. The Tudor-period castle has a storied history, having been the childhood home of Anne Boleyn (ca. 1501-1536), King Henry VIII’s second wife. Most of the gardens, including the spectacular Italian gardens, were built much later by the American philanthropist, William Waldorf Astor (1848-1919). Astor moved to England with his wife and children in the early 1890s and in 1903 purchased Hever Castle, which had by then fallen into disrepair. The house was meticulously restored and expanded and the exceptional gardens, outfitted with the finest ornament, were the crowning achievement.

William Waldorf Astor was a passionate art collector, his interest ignited while living in Rome and serving as President Chester Arthur’s Italian Minister from 1882 to 1885. He filled the Italian Gardens at Hever Castle with Roman sarcophagi, amphorae from Pompeii, statues, water features, and an outstanding collection of 14th-16th century Venetian wellheads.

The revival of the formal, Italianate garden, so strikingly different from the naturalistic park spaces that had been fashionable for more than a century, was spurred by the numbers of travelers to Italy who wrote about their experiences, took sojourns there to study, and brought home wellheads among their other souvenirs.

Typical of these Grand Tour mementos are these two wellheads at Hever Castle, showing an evolution of style from the 15th to the 16th century. The robust square-form wellhead with luxuriant corner acanthus leaves and rosettes was typical of the 15th century. Another Hever example, this one from the Renaissance period c. 1550, is less reliant on architectural precedent and more overtly inventive. It fully embraces classical design elements with its use of lion masks, acanthus leaves and cartouches carved in deep relief.

Charles Platt (1861-1933), an American artist turned architect and landscape architect, traveled to Italy with his brother in 1892. Visits to several important Renaissance gardens, including the Boboli Gardens and the Villa d’Este, had a transformative effect on the young artist. Platt’s writings on the experience—appearing first in two articles in Harper’s New Monthly Magazine in 1893– resulted in the 1894 publication of the seminal book, Italian Gardens. 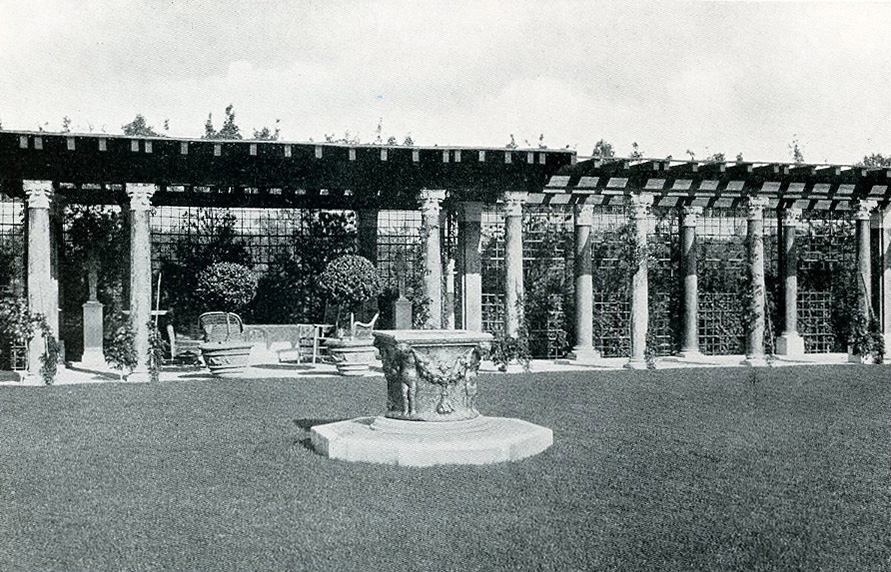 In his concluding remarks, Platt notes that his purpose was to “show some of the most salient of the existing features of the formal garden as they may be seen to-day in Italy…It is hoped that this work may be of value towards a more thorough understanding and appreciation of the reasons which led to a formal treatment of the garden”.

Guy Lowell was another influential proponent of the Italian garden. A quick thumbing-through of his exhaustive American Gardens, published in 1901, reveals the prominent role Venetian wellheads played in American garden design. One of many gardens pictured in the book is Faulkner Farm, a Brookline, Massachusetts estate that was, between 1899 and 1919, the most published garden in the world. The architect responsible for the 1896 garden was none other than Charles Platt, Naturally, his gardens included multiple Venetian wellheads. And, of course, those paragons of good taste were placed prominently where they could best be admired. 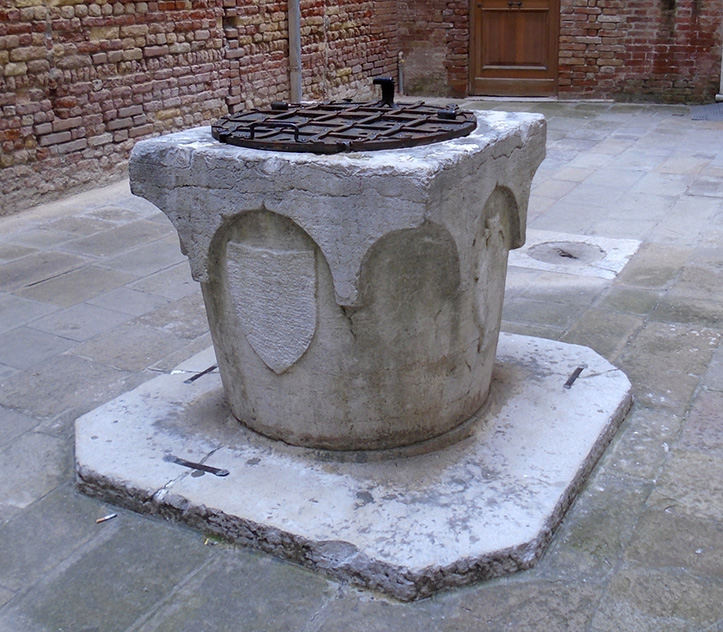 Wellhead with coat of arms of the donor family and a thief-proof iron cover. Photo credit: Eugenio Hanson OFS

Platt’s contemporary, the American novelist and tastemaker, Edith Wharton (1862-1937), added her own voice to the collective endorsement of Italian garden design with the publication Italian Villas and Their Gardens in 1904. Complementing Wharton’s perceptive prose is a collection of romantic, idyllic illustrations provided by American artist, Maxfield Parrish (1870-1966). The effect of the whole is quite dazzling; it isn’t hard to understand why the book was so wildly influential.

Indeed, the effect of Wharton’s book– and of Platt’s– was lasting. In a 1911 article for The American Architect titled “The Garden at Pocantico Hills”, architect William Welles Bosworth (1869-1966), who happened to be working at the time on the design and construction of John D. Rockefeller’s Kykuit estate, praises Italian gardens as the “origin of all subsequent garden tradition”.

In recounting the rise of the formal garden, Bosworth reminds us, rather derisively, of the naturalistic landscape style that started in England and flourished in America through the practices of Andrew Jackson Downing (1815-1852) and Frederick Law Olmsted (1822-1903):

Having no American gardens to follow, but rather, English influences, with the great preponderance of English literature to furnish the background of romance…it was naturally the English treatment of lawn and specimen trees, with now and then a pond and a rustic bridge and swan here and there, a statue or vase of cast iron painted white, standing in a bed of canna or castor bean that satisfied the hearts of our fathers. But there followed the faster crossing of the ocean and European travel, and people brought home miniature columns and triumphal arches from the Roman forum…Architects began to go to the École des Beaux-Arts, where they tell you in disdain that the best way to plan an English garden is to stick a few pins at random on the paper to represent trees, then crumple up a piece of twine and drop it over them for paths.

One of the art dealers who imported large numbers of garden ornaments from Italy to meet the new fashion was Eugene Glaenzer, a Frenchman who operated primarily out of New York. He was instrumental in acquiring Italian ornaments for exceptional estates throughout the United States, including Vizcaya, industrialist James Deering’s Miami home, and Hearst Castle, the California property of William Randolph Hearst. 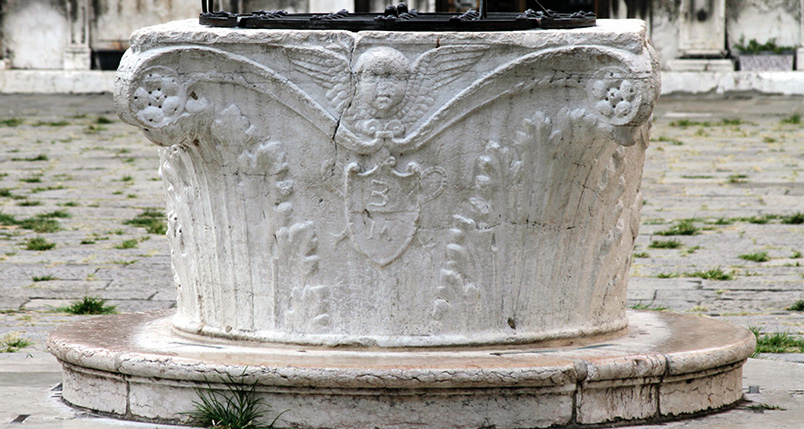 An admirer of Eugene Glaenzer was Samuel Swift, a sharp-witted, opinionated art critic who often wrote for House & Garden. Highlights from Glaenzer’s garden are featured in Swift’s article “Garden Marbles from Abroad”, which appeared in the August 1903 issue of House & Garden. Of particular note are the number of wellheads pictured, including one that was soon purchased by William Randolph Hearst for Hearst Castle. Swift observes that “old well-heads…are turned into palm jars, or filled with miscellaneous plants. The bowls of ancient fountains, detached from crumbling settings in Italy…begin life over again in the new world, under rich if not always judicious auspices, as receptacles for growing flowers or for swimming gold fish. Emigration is the order of the day in Italy”.

Swift points out that the demand for Medieval and Renaissance wellheads far exceeded the supply—necessitating the production of old-style wellheads specifically made for the export market. Thus, dating Venetian wellheads can often be a very tricky business.

Eva Schwartz has an M.A.in the History of Decorative Arts from Parsons School of Design/Cooper Hewitt Design Museum. She has worked for Barbara Israel Garden Antiques for over 20 years. The Dirt on Vintage Dolly Tubs

From the 19th century, these barrel like vessels were used in practically every household to wash linens and clothes before plumbing. It was a long arduous chore and dolly tubs were early implements to make the washing just a little bit easier! 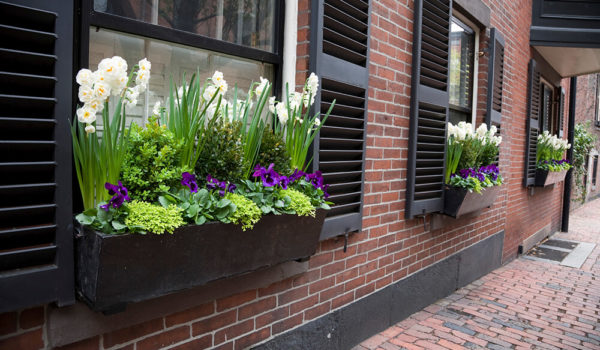 Window boxes are essentially our gifts to strangers. These masterfully-composed vignettes are proof positive of a gardener’s inherent generosity and civility. 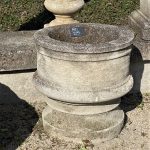 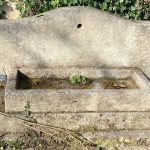 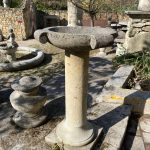 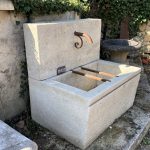 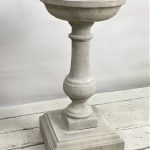 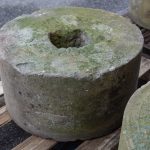 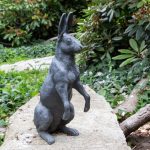 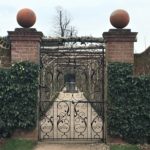 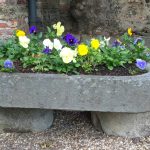 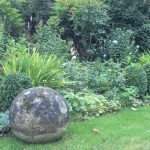 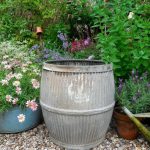 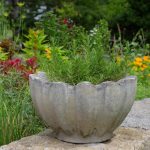 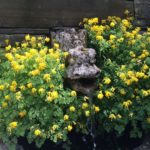 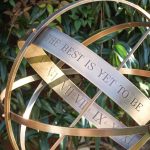